The Case of The Woebegone Widow 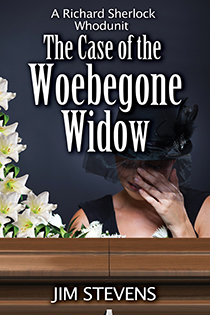 It seems only fitting that Sherlock is hot on the trail of insurance malfeasance in the middle of a miserable Chicago winter. It is all quite an undertaking dealing with a grief-stricken widow living in Catatonia, Russian mobsters, Silly Putty smugglers, and a dead suspect, who shows up dead for a second time frozen solid in a 7-11 dumpster.

Toss in Tiffany meeting her match in a fight for affection, snow days, sniffling daughters, and an afternoon being whisked in a communal bathhouse, and you have the fifth Richard Sherlock Whodunit,The Case of the Woebegon Widow.

Preview a sample scene of The Case of The Woebegon Widow

“It was laugh out loud funny.”

“Another solid and fun mystery with a quirky supporting cast. I’ve truly enjoyed every book in this series and look forward to the next one!”

“Richard and Tiffany just keep getting better and better.”

“I love all the Richard Sherlock mysteries! This one doesn’t disappoint.”

“Jim Stevens has a formula that works like Columbo the detective. Mr. Sherlock, his side-kick Tiffany, his trusted helpers and his kids make for fun reading with loads of laughs.”

“One of the best, funniest writers today.”