Hell No, We Won't Go 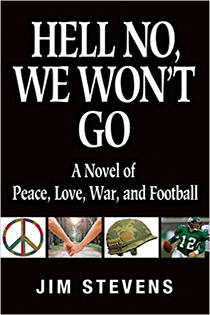 The 1969 college football season is coming to a close and Touchdown Tony McIntyre couldn’t be riding higher. He’s in the running for the Heisman Trophy, on the cover of Sports Illustrated as “The next Joe Namath,” and about to be drafted into the NFL. He’s two wins away from taking his team to the Rose Bowl, when receives a letter from the Selective Service, “Greetings,”

This must be a mistake. Tony can’t get drafted, he’s about to get the biggest signing bonus in NFL history. Tony has to find a way out.

As anti-Vietnam war protestors make their voices heard on campus, Tony finds himself caught in the crossfire of one of the most decisive issues Americans have ever faced. All he ever wanted to do is play football, but he discovers he’s now in a much bigger arena. It all comes down to one Saturday in November, when Touchdown Tony McIntyre is thrust into a game where the stakes are life and death.

Preview a sample scene of Hell No, We Won’t Go

“Hell yes! This is a terrific read, and iconic in its portrayal of one of the most turbulent times in American history (I know, I was there).”

“As I Canadian I think my view on this book may be different. I was in elementary school during the war in Viet Nam. I didn’t know much about the war. I found the book to be fascinating.”

“This book illustrated the consciousness-awakening of the turbulent peace demonstration days and the ripple effect we still see and can learn from today.”

“This is a captivating recount of a man redeeming his humanity and appreciating what really matters in life. It’s a dramatic and interesting story, with frequent touches of subtle humour, which highlights perennial themes such as power, hypocrisy and self-interest, responsibility, values and justice, dignity, courage and love.”