The Case of Mr. Wonderful 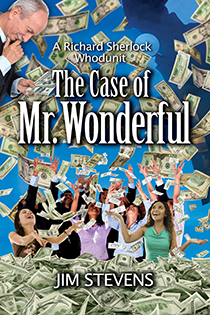 Richard Sherlock would rather be on the receiving end of a wealthy charity instead of in the middle of investigating the missing millions from one wealthy donor, but, as usual, he has no choice. The last thing Richmond Insurance wants to do is pay out on a six-million-dollar claim.

Sherlock is thrown knee-deep into oodles of free money, but can’t seem to pick up a dime for himself. Complicating matters are cutthroat, corporate conniving, his daughter dating, a new career calling, a botched burglary, Tiffany’s terrible tryst, and how to use used food.

Preview a sample scene of The Case of Mr. Wonderful

“Another excellent read by Jim Stevens. I love his style & the humour is really hilarious…not many books can make me laugh so much!!”

“Jim Stevens has written a very enjoyable book without incorporating obscenity, graphic violence or sex. He writes with a style that keeps your interest up with mystery, humor and a surprise complex conclusion. It’s full of wry humor and sarcasm, peopled with quirky characters, and has a great story line.”

“Another great addition to the series. It’s easy to get very attached to the characters and I always look forward to the next book to see what they are up to next. Wonderful sense of humor and plenty of plot twists to make this a real page turner.”