The Case of Moomah's Moolah 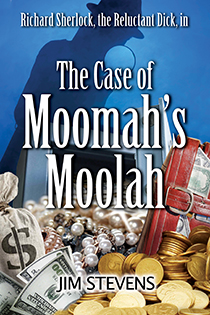 Richard Sherlock is back on the case of Moomah’s Moolah.

It starts with a simple kidnapping, proceeds to a botched ransom drop, escalates to a safe deposit box theft, and culminates in a missing four-million- dollar diamond necklace.

The timing is awful. It all goes down during Sherlock’s two summer weeks with his daughters, Kelly and Care. The suspects are worse; Tiffany’s half-uncles, half-aunts, and other half-wit relatives. And, Moomah is the worst possible victim, because the Grande Dame of the insurance fortune now exists in an Oz state of mind.

In order to solve the case, Sherlock enlists the help of an odd group of associates, including Phoebe the Forger, Freddy the Fencer, Second Story Man, Shervy, and the Mona Lisa.

Sherlock will reluctantly figure out whodunit, but it won’t be easy.

Preview a sample scene of The Case of Moomah’s Moolah

“I almost missed my bus stop several times because I was so engrossed in it.”

“Stevens has created one of wackiest cast of characters that has ever inhabited the mystery universe. Don’t miss this funny book.”

“This is really a wild ride. Crazy, funny, weird characters. Rapidly changing plot. Lots of humor. I loved it as a great bedtime read.”

“The Very Best book I have read in Years and I read book a week. wonderful, laughed out loud!!!!”

“What a book! Twists and turns galore. A really eccentric family. The main character, a divorced former cop, now a PI, his kids, and an almost empty bank account. The crime itself is a hoot.”

“This was the most fun I have had reading a book in a long time. The characters were great and the twist and turns were everywhere a real good time.”