The Case of The Not-So-Fair Trader 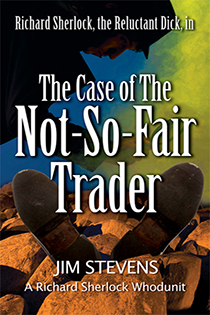 A despicable stock trader is found buried under an avalanche of his own garden rocks, causing fired-from-the-force Richard Sherlock to be yanked off the bowling alley, and whisked to the crime scene by his pampered protégée Tiffany Richmond. He must prove murder and stop payment of the twelve-million-dollar Richmond Insurance policy.

Nothing makes sense. Crime scene is a mess. There is no money trail. There are too many motives from too many suspects who have too many alibis. Worst of all Sherlock’s bad back is acting up, his ex-wife wants more money, and his murder investigation is putting a serious dent in his parenting schedule of his two daughters.

Richard Sherlock may be a reluctant dick, but he’s better at finding the who in the whodunit than anyone else.

“Without question, The Case Of The not So Fair Trader, just blew me away. I have to admit from the very first page with the snappy and irreverent dialog I was addicted.”

“Love the two main characters…they work real well together. No violence, bad language or sex….just a good light hearted detective novel with a twist at the end.”

“Comedy and mystery together, loved it.”

“This book has it all. Humor, Great mystery and intriguing plot. It was a fun book to read and the cast of characters is a family nightmare.”

“This has to be the most complicated cast of characters in the end I’ve read in a long time. Thanks.”