The Case of the Comatose CEO 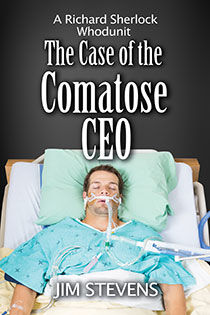 The Case of the Comatose CEO is the crazy eight of the Richard Sherlock series.

Crazy? You-betcha!  Starting with chauffer Sherlock saving Tiffany’s hot date at a corporate soiree, and for his reward, Sherlock gets pricked, plucked, and probed for possible poisoning. The investigation’s even nuttier with the coma victim disappearing, a demented dad, a sister in rehab, and Sherlock’s daughter Kelly falling in love. Toss in Otto the Oaf, Carnack the Crippler, Wait Jack Wayt in the cold and flu season, Tiffany being a brat, and Sherlock’s famous Turkey Palooza leftovers from Thanksgiving, and you have a recipe for craziness only Richard Sherlock could figure out.

A despicable stock trader is found buried under an avalanche of his own garden rocks, causing fired-from-the-force Richard Sherlock to be yanked off the bowling alley, and whisked to the crime scene by his pampered protégée Tiffany Richmond. He must prove murder and stop payment of the twelve-million-dollar Richmond Insurance policy.

Nothing makes sense. Crime scene is a mess. There is no money trail. There are too many motives from too many suspects who have too many alibis. Worst of all Sherlock’s bad back is acting up, his ex-wife wants more money, and his murder investigation is putting a serious dent in his parenting schedule of his two daughters.

Richard Sherlock may be a reluctant dick, but he’s better at finding the who in the whodunit than anyone else.

Preview a sample scene of The Case of the Comatose CEO

Richard Sherlock does it again.
“Someone poisons Tiffany’s date and Richard Sherlock has to figure out who and why. All the usual cast members are here, Herman is on a cheese and Cheetos diet, and I don’t think RS complained about his bad back once (although I’m beginning to think we should set up a Go Fund Me page and get him a new car). God, I love these books. If you have never read one, buy this and enjoy. If you have read one, WHY HAVEN’T YOU BOUGHT THIS YET? Give yourself a treat.”

Fun, Fun, Fun
“Once again, Jim Stevens does it and well. Richard Sherlock is a very accomplish detective and with his daughters and the lovely Tiffany, solved a very complicated story line….for him, not the reader of course.”

“A book a year is not enough when you love a cast of characters like this one. Can’t wait for the next one.”